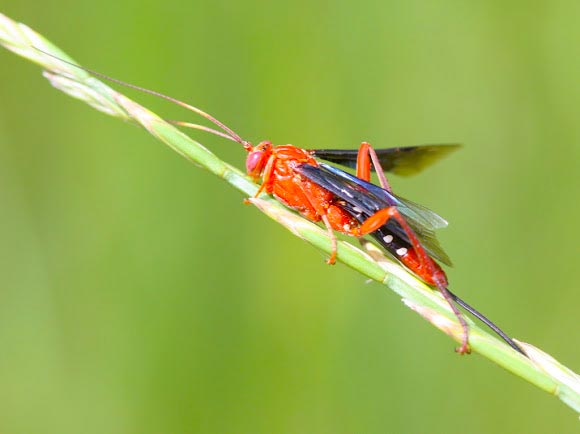 It seems to be a good season for the Orchid Dupe Wasp this year. It’s not unusual to see a few of these wasps around the warmer months of the year but judging by the number of enquiries we have had of late, the orchid dupe wasp is in bigger numbers this year. But no need to panic this wasp is not as sinisterly as it appears.

Most of the enquiries we get describe a small red wasp hovering around over the client’s lawn, giving the impression that they are nesting and potentially destroying the lawn, hence the commonly used term lawn grass wasp. But in actual fact, this wasp is actually considered to be a benefit to your lawn as it is actually patrolling your lawn for lawn grub or armyworm for which it parasitizes. The wasp uses its long-modified stinger, which is actually an egg-laying tube called an ovipositor, to insert its eggs inside the lawn grub itself, where it will hatch and consume the lawn grub from within and pupate out as an adult wasp killing the lawn grub in the process. These wasps live an essentially solitary lifestyle so lack the aggressive behaviour normally associated with social insect species such as dreaded paper wasps.

The Orchid Dupe Wasp gets its unfortunate name from an evolutionary trick of nature where a particular group of orchids produce flowers that look and smell like female wasps. The male wasp mistakenly attempts to mate with the flower, pollinating it in the process.

The presence of Orchid Dupe Wasps may or may not indicate a lawn grub issue but it certainly doesn’t instigate any need for fear of the wasp itself.